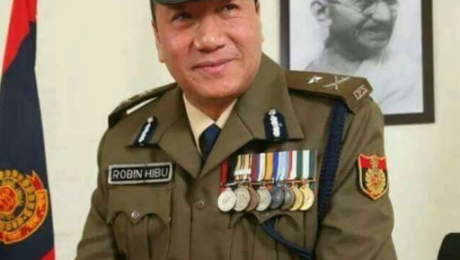 Root of the problem is that all our planning done for metropolitan cities like Delhi,Mumbai,Kolkata

It is a huge irony that while the government and its various wings profess to be making all efforts to placate the youth from the North Eastern states by promoting their art, talent and culture, their condition remains pitiable in this era of ‘Sabka Saath Sabka Vikas’ (Support for Everyone, Everyone’s Development).

To some extent their own lifestyles, and their liberal and trusting nature are responsible for some of the incidents involving them. In most cases they are victims of discrimination in metropolitan cities like Delhi, which is a real tragedy.

Some such recent incidents have been chronicled by Robin Hibu, one of the most decorated police officers in the country, and the first from Arunachal Pradesh.

Hibu was recently promoted to ADGP Special Commissioner of the Delhi Police. He who runs an NGO for the people of the North East called Helping Hands India, which takes care of their education and healthcare, and even arranges for coffins whenever the dead are found abandoned.

Hibu told this writer, “We have been in a very precarious situation for very long. I am doing what little I can to change it – but the root of the problem is that all our planning in this country is done for India, represented by metropolitan cities like Delhi, Mumbai, Kolkata etc.

“But the majority of the country lives in Bharat, which consists of the North East, Jharkhand, Odisha, Chhattisgarh etc. which are not on the radar.”

Hibu said there is a basic flaw in the skilling options being offered by the Centre, which provide a job for a maximum period of two years after skilling – but what after that? “There is no long-term planning because this area has been left out of the planning process as it lacks media, judiciary and has very little political clout due to its numbers,” Hibu said.

“Instead of offering region-specific training which for our people should be bamboo based or agriculture based, they give training which is not relevant for these youths.

“My main worry is that young people from these areas are very susceptible to influence from across the border, being surrounded by China, Myanmar and Bangladesh,” Hibu added.

His anguished note to an NGO group is being reproduced here with his permission, to show the kinds of problems young people from the North East face in the country.

“ – One Mizo female married to foreigner since 2015 abandoned by her husband since one week, she is unemployed (was working), need help to trace her husband and money for food and rent house. Anyone there at Hyderabad, please inbox me.

– One Arunachal female arrested for immoral flesh trade and inside jail since last one week at Vijayawada, Andhra Pradesh. Somehow, Helping Hands Ngo informed her family and has engaged a lawyer for her bail.

– 15 north east youth from Manipur, Nagaland, Mizo are still lodged inside custody at Noida for running a fraud BPO and cheating citizens through cyber fraud.

– Two Manipur and Sikkim females were saved at last minute before signing an agreement with a cheater and criminal business man for running an unregistered BPO Call center at Bangalore.

– Another Manipur female is in desperate condition as her employer at SPA at Vadodara Gujarat who did not give her pay for 6 months as she did not pay heed to his illegal/ immoral demand. I have already informed the police to help her and alerted our Helping Hands Ngo volunteers/ activists to help her with some money for her food.

– Another Darjeeling youth had paid 4 lakhs for job and visa for Canada, the recruiters are still asking for more 4 lakhs of money for his visa and jobs in Canada… guided him to file complaint immediately today. He is depressed and counsellor of Helping Hands is counselling him.

– 4 Naga youth (who went to join the merchant navy as cadets) are stranded in a dilapidated ship at some unknown sea port in the Arabian Gulf sea, their passports are with the recruiters at Mumbai. They are stranded/ waiting for clearance since last 15 days and somehow surviving with rice and boiled potatoes in the makeshift kitchen in the old dilapidated ship. They were recruited after paying 2 lakhs each. Somehow contacted me for help. Asked them to send me details of their plight for police help etc.

– Do not know how to deal with all these ever increasing north east youth problems in cities….

To my horror, I have come to know hundreds of youth are migrating to cities every day in search of any kind of jobs in cities…..

– It’s so depressing to hear so many outcries for help and justice every day….” 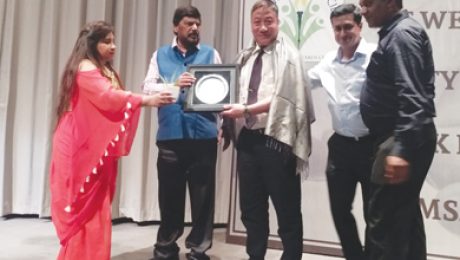 NEW DELHI, Jun 27: Inspector General, Joint Commissioner and founder of Helping Hands NGO, Delhi, Robin Hibu received the ‘The Humanity Excellence Award’ from Minister for Social Justice GoI, Ram Dass Atwal at Sirifort Auditorium here on Tuesday last.
The NGO was presented the award in recognition of the numerous philanthropic activities undertaken by it especially, for the North East people in distress.
Speaking on the occasion, Robin Hibu highlighted problems like racial discrimination, exploitation, fraud and ill treatment faced by the North East people in the cities and reminded them of the avoidable deaths of Nido Tania, Salouni, Richard Loitam, Dana Sangma, Yamgampi.
He also acknowledged the help extended by the people of Delhi towards people of the North East through various philanthropic activities.