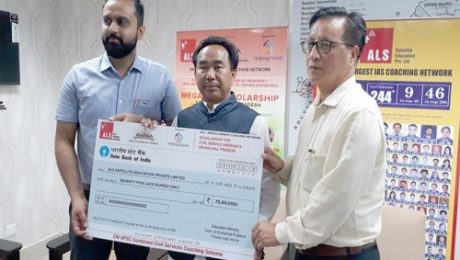 ITANAGAR, Aug 27: Education Minister Honchum Ngandam on Monday announced the Chief Minister’s UPSC Combined Civil Services Coaching Scheme Scholarship worth Rs 75 lakhs for 75 IAS aspirants to the ALS IAS, Itanagar.
Ngandam urged the youths of the state to avail the scholarship, and expressed gratitude to Chief Minister Pema Khandu and the ALS for the “path-breaking initiative.”
The minister said he would make a formal request to all the MLAs of Arunachal Pradesh to “participate in this noble initiative and sponsor needy and deserving IAS aspirants from their constituencies.”
National sales head Prateek Bhattacharya announced an additional scholarship worth Rs 85 lakhs for 225 students by the ALS under its corporate social responsibility scheme.
The announcement has created an opportunity for 300 talented, needy and deserving IAS aspirants of Arunachal Pradesh to avail of scholarships worth Rs 1.6 crore for UPSC coaching.
Bhattacharya informed that the ‘mega IAS scholarship exam’ would be conducted at 11 am on 2 September, at Dera Natung Government College “to select the top 300 IAS talents of Arunachal Pradesh, who would be trained at the ALS IAS Itanagar to compete in next year’s UPSC exam.”
The sales head said the ALS is confident that such initiatives by the state government and the MLAs would reach the remotest parts of the state.
“It will attract the top IAS talents who can be well-trained at ALS IAS Itanagar, producing excellent results in civil service exam, making Arunachal proud in the coming years,” he said.
The ALS meanwhile thanked NGO Helping Hands led by Robin Hibu, Education Secretary Madhu Rani Teotia, and Higher & Technical Education Director Tayek Talom for their continuous guidance and support.